From the simple passing game to the complex combination, we have published tutorials that take all passing techniques into consideration. We're interested in the complex procedures: can my team do that? Yes it can, want to bet?

Play Against The Wall

Right Down The Field

Fundamentals on passing and combination play

The passing game and the combination game are among the forms of play that produce the greatest acceptance in soccer. They are absolutely symbols of the "team sport of soccer." Many passes, little dribbling in the game, and spectators, parents, and soccer trainers are already enthusiastic about team performance. On the other hand, a team will quickly lose team spirit if dribbling is preferred over passing. "Fumblers" are often not popular, since they interfere with overall game performance. Meanwhile this attitude is criticized in the literature more and more frequently. In particular, in children's soccer the urge to move around and to play with the ball on the foot should not be suppressed. There is a risk of indulging in a duel, which can be corrected in later years only with difficulty. Accept the small dribblers and don't compel passing.

Good and effective passing is possible only when the fundamentals of soccer prevail. Taking the ball and control, feeling the ball and coordination, are basic prerequisites for successful combination play. Remember this in the training course.

The importance of passing in soccer is gigantic. According to studies, more than 50 % of the goals made are preceded by a targeted pass. Added to this are goals after crosses, which I include in the passing game. No soccer trainer must omit modern pass training in his daily work.

Information: There are already more than 1,000 animations online at www.soccerdrills.de, as well as plenty of interesting articles by very well-known soccer experts.

If you don’t want to wait for the translations, you can take a look at Soccerdrills.de. The animations often speak for themselves.

Inside of the Foot Pass – Basics 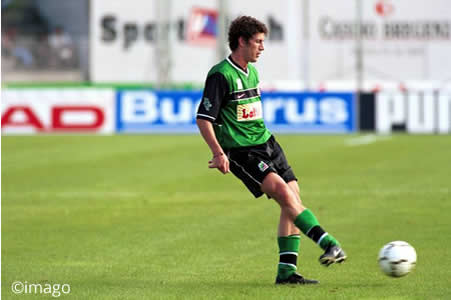 = Number of Balls: All = one ball per player | + = sufficient number of balls

= needed helpful material:Yes or no