Catching and moving games should never be left out when training children. They develop coordination and through their competitive nature have a great fun factor. Children love these games. Here are the first seven games, the next seven you will find on the next page.

You will need to prepare labels. You require for a team the following four members: goalkeeper, defender, mid-fielder and attacker. Write these terms respectively on the labels. Dependent on the number of children, you will require more teams. For example, if 17 children take part, then you will need four teams, so four x goalkeeper, defender, mid-fielder and attacker. That is in total 16 labels. The seventh child will during the course of the game be knocked out, but that is okay and is part of the game.

On command the children all sprint to the laid out labels. Every child tries to get hold of a label; this is though not the end of the game. The children then should also create teams and get together in these groups. The team members should then either sit or lie on each other in the correct predetermined order: the goalkeeper at the bottom, then the defender, then mid-fielder and then attacker. The children in the group, who are the first to create a team,each win a point, and then the game starts again.

The children move around freely in a space. When the coach tells them, they get into teams. For example, the coach shouts a number; the groups, which are then made, must have exactly this number of members. If a child doesn’t find a team then they are knocked out, or better still, every child, who finds a group, gets a point. Other groups: colour of trousers, colour of socks, eye colour etc.

Each time two children stand face to face and place there palms against each other. The arms are thereforestretched out on front of the body; this is easiest when at shoulder height. The children spin on their own axis and at the same time close their eyes. After they have spun around, they place there palms, once again, against each other. Their eyes stay closed the whole time. This drill can also work if the children spin more than once.

One of the classic catch games. One child is the wolf and the other children are assembled level with each other and in a row. The wolf stands a few meters behind the row. On the other side of the playing area there is a marked out zone. This zone is the house that the children being chased need to get to.

The game can now begin:

Wolf:“Who is afraid of the Big Bad Wolf?”

Children: “Then we run away from him!”

The wolf then chases the children, who try to get to safety of the house. The children, who are caught by the wolf before they get to house, will also become wolves in the next round.

Per team a pair of large old training trousers or shorts.

This game is a relay competition. Each team gets into pairs. After the starting signal all of the first pairs in the teams put on the trousers. Each person puts one leg in one of the trouser legs, and then the race can begin. The pair reaches a point where they turn, and then returns to the team, takes the trousers off and passes them on to the next pair. Which teams wins the relay competition? In addition, you can build a course that need to be crossed (Slalom etc.).

Each group requires one ball. Groups should have at least four children in them.

Mark out for every group a zone. One child holds the ball in their hands, shouts the name of one of the other members of the group, and throws the ball vertically in the air. The child, who was named, tries to catch the ball before it hits the floor. If they succeed, then the catcher becomes the thrower. If the ball is not caught, then the thrower gets a point. A point can only be scored if the ball falls within the marked out zone. The height of the throw should reach at least two metres (dependent on the size of the zone).

In a marked out area all of the children, apart from two “Bird Catchers,” move around next to the Bird Catchers. If a Bird Catcher touches one of the birds, the bird must remain on the spot and flap their wings (bent arms). By being touched on the shoulder by one of the other birds the frozen bird can be once again freed. 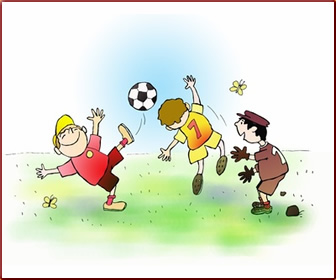