The Goalkeeper And His Reflexes

Examples of practice drills to improve a goalkeeper’s reactions

“What a reflex!” is a sentence that is often heard in professional soccer. Certainly, goalkeepers often don’t have an easy time, what with all of the stimuli catching their eyes. But where do these reflexes come from? Is it a special characteristic that you either have or you don’t have?

No, reaction speeds can be trained in the same way that muscles can. What doesn’t help, is a player kicking a ball one thousand times at the goal from a distance of sixteen meters; that is not nearly enough to really train reaction speeds. The goalkeeper isn’t surprised by these shots. You also don’t train your muscles by just “using” them. 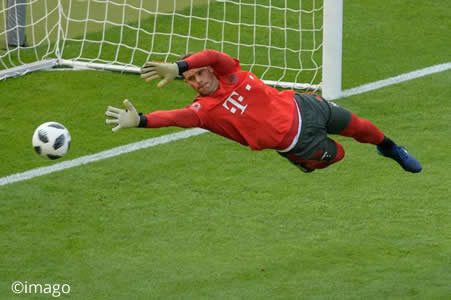 Let’s use ice-hockey as an example. Everyone has seen how especially goalkeepers need to react very quickly when pucks come flying towards them at up to 170 km/h. How do goalies train their reaction speeds though?

Something that the goalkeeper is not expecting has to happen: something erratic, fast, and crazy. That’s why ice-hockey coaches get creative: ice-hockey goalies train with the whole team. Fifteen people stand around the goal and each player has a stick and a puck.

The goalie never knows who is going to shoot next, or how fast the shots will be made in succession. Something like this hones reflexes and reaction speeds quickly and very effectively.

This concept can also be applied to soccer practice. What’s important is that the individual drills include an element of surprise for the goalie.

Three examples of reaction training for the goalkeeper

1. Place some balls approximately five meters away from the goal. They should be lined up parallel to the goal line and there should be a lot of balls. Make a second row of balls about eleven meters from the goal.

The coach will kick these balls low at the goal. What happens? The balls that are close to the goalkeeper are hit and jump towards the goal in an uncontrolled manner. The goalie may not let any ball past - neither the bouncing balls nor the balls that were shot. That’s his job.

You can see this drill in the animation here: Billards

2. Now the goalkeeper should stand on the goal line, facing the goal. The coach stands a few meters away from the goal, depending on the strength of the shot.

On the coach’s signal, the goalkeeper quickly turns around and tries to stop the shot. This sequence can be quite difficult for the coach also, since timing the command to turn and kicking the ball can be tricky.

Still, you shouldn’t expect miracles. For the most part, genetics are responsible for a person’s reflexes. You can improve them through practice, but a goalkeeper should already have good reaction times to begin with.